How to “Cook” Success! 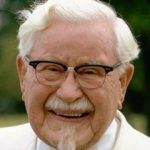 At age 5 Sanders father died. At age 16 Sanders quit school. At age 17 he had already lost 4 jobs. Between ages 18 & 22, he was a railroad conductor & failed. He joined the army & washed out there.

He applied for law school he was rejected. He became an insurance sales man & failed.  At age 20 his wife left him and he became a cook & dishwasher in a small cafe.

At age 65 he retired. Decided to commit suicide, he had failed so much.

COOKING!  So he borrowed $87, bought & fried up chicken using his recipe, went door to door to sell them in Kentucky. At age 88 Colonel Sanders, founder of KFC was a billionaire.

If your feeling like giving up and you’ve had enough, it’s when magic is born.